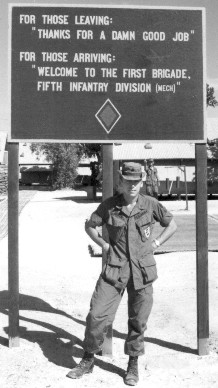 I was a career soldier on my second enlistment. I had been trained as a track and wheeled vehicle mechanic then assigned to 1st BN 33rd ARMOR (Germany) as a mechanic. Later I transferred to M-60 tanks as Officers and NCOs were pulled for duty in Vietnam. My re-enlistment took me to the Chicago – Gary – Milwaukee area Air Defense Nike Hercules bases where I found myself in the middle of race riots and the Democratic convention demonstrations. After being put on orders as a “designated marksman” and finding myself the junior NCO triple slotted with NCOs coming from closing Nike bases, I submitted a “10-49” for Vietnam.

I volunteered to go to Vietnam as a Tank Commander and was assigned to 1/77th Armor. Before I finished in-processing, the Operations Sergeant asked me to stay at the Replacement Detachment as an Instructor, leveraging the deal with promises of cold beer and a warm, dry bed if I agreed. And to be honest I was young and dumb, so he had to tell me I wouldn't see cold beer for weeks, and would sleep when I could, where I could if I went to 1/77 Armor.

I always considered the offer as temporary, knowing I could be sent to the field if there was a critical shortage of TCs. I did hitch hike the length of the country in hueys and trucks; and I went out on a couple of missions with 517th MI. But my day-to-day job was just providing in-country training to FNGs. Most of my tour, I did a day patrol and a night "ambush" every three to four days in the area between Camp Roberts and Camp Red Devil. Yep, we took new guys, with real weapons and ammunition, claymores, and set them up (usually in a "L") along some trails that ran through that area. Why we never had a fratricide incident I'll never know, but I saw close to 5000 men go through the patrol and ambush, with only one claymore busted by a scared second LT.

When I went through training, we didn't patrol at all ... most of the classes, each an hour long, were held in a classroom. We did walk across the street to a training area (just a draw with some vegetation) next to the AFVN tower, where one of the instructors had built simulated VC booby traps.

My first classes as an instructor were in General Subjects; Chemical, Biological, and Radiological warfare in which I had received formal training and a MOS skill identifier; a block on "the McNamara line (I don't recall what it was called) where I showed some of the electronic sensors (seismic, magnetic, thermal, aural, {smell}) used to detect enemy movement, (check the 407 RRD links - they received the telemetry from the sensors and called in artillery, naval, and air fire support); Survival, Escape, and Evasion; and a class on Combat First Aid / requesting "Dustoff" and prepping the area and the wounded for medevac. I also assisted the "Weapons team" when they did their live fire demonstrations and M-16 orientations with students.

Mike Mullenix, (one of the '68 originals) came out of the field (1/61) and extended his tour six months to be an instructor. He was at the Repo Depo when I got there and was my mentor. As some of the older (Korea era) NCO's left, Mike became the "Infantry team" Senior Instructor and I moved to his team in the 11E40 Armor NCO slot.

Mike and I modified the Infantry subjects curriculum from classroom to classroom, practical exercise, classroom. We also received input from guys coming thru on their way home or those whose units were bringing them out of the field as a reward for their bravery. One of our Detachment Commanders was such a person; Captain Hank Galindo, on his third tour in Vietnam (1st as SP4, 2nd as SGT, 3rd as SSG) was assigned to the 1/11th Infantry. Bringing the remains of the Company out of a bloodbath, he was given a battlefield promotion (you will need to verify the story, but that's how it was related and how I recall). CPT Galindo pulled a number of NCOs with him who became Instructors --- most had been nominated for DSCs or Silver Stars. Anyway we constantly received new ideas and fresh combat experiences while I was an instructor.

Some of the things Mike and I did included a RECON of the area between Camp Roberts and QTCB to check for suitability for a training area. We found a number of trails, some dirt paths along the stream, and a number of trenches through tall grass area. All were basically high speed and hidden from the air. We also found fresh rice balls on one occasion. On one of the first "patrols" of the area, I used three claymores to destroy a dry well that seemed to be the hub of the trail network. Unfortunately, I didn't coordinate the destruction with anyone; so later in the evening we almost had a crater analysis team walk through a 150 man L shaped ambush. Mike was monitoring a Brigade radio net and was able to assure them that we were responsible for the noise. The next morning we met with the Brigade XO to explain what we were doing and then received an official mission to patrol the area and provide intel.

Our early practical exercises were down by the water point and just across the bridge over the stream that ran between Red Devil and Camp Roberts. Later we also developed a patrol lane down through the mud and water by the mortar pits and put in demolition pits to simulate gunfire and claymores. After that phase, we would move on to a location on the west end of the area between Red Devil and Roberts and set up a perimeter around a big mound or hill. We would then start patrolling again from the mound and set up LPs and OPs around the area. Sometime around 2200 to 2400, we would give a signal and after recovering everyone, we would move back to the Repo Depo.

So the training at the Repo Depo evolved while I was there and I'm sure it changed after I left. I received formal "Method Of Instruction" training while in Germany (MOI training was probably the primary reason for my selection as an instructor). I know many instructors before me had no instructor training except OJT (On the Job Training).

I also got to be perimeter guard section NCOIC, for Battalion and Brigade, and Detachment, Company, Battalion and Brigade CQ as a Staff Sergeant. The bad thing about being a SSG (E-6) was you were on everyone's duty roster. SGTs and below were usually limited to Company duty rosters, while the SFC (E-7) and above were only on BN and higher duty rosters. So the SSGs wound up with night duties at least twice a week, but the good side was you could sleep during the day and the First Sergeant and Operations Sergeant would leave you alone. I always slept better during the day knowing there was little chance a sapper would slip in and interrupt.

I later found out that if you have "organic transportation" like a truck, track, or tank, and you have a crew or section, if there is beer and ice to be had, you will find a way to get it and have it on hand. But, young and dumb, I didn't know that when I was asked to be an Instructor. And given what I know now I wouldn't change my answer if I had to do it over. It was a good ride and I didn't have to fake an injury or cry C.O. status as some did to get a REMF job; I was asked to do a job, I didn't seek it or even want it at first. Just lucky I guess!

Since the Replacement Detachment was just across the street from the AFVN TV tower and the big generator, we had plenty of electricity and electrical appliances. Claymore wire was about like appliance cord, so with a few plugs and sockets we put light bulbs in grenade boxes to dry our boots and clothes. In my hootch we had a refrigerator, broiler oven, box fans, TV and the radios you see below. With the radios I was able to pull in many major sporting events as they were being played rather than waiting for the tape delay rebroadcast from AFVN. 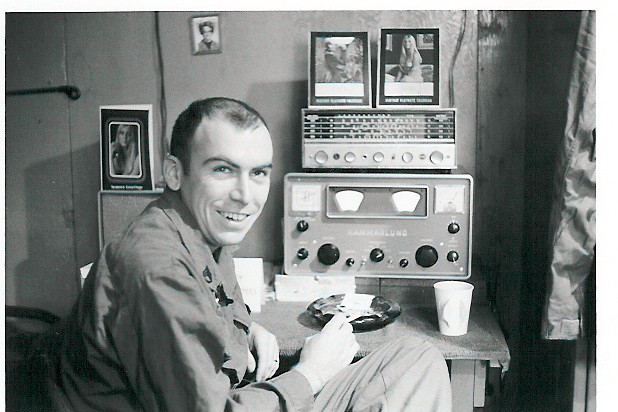 "Checking out the Grey Area inside the perimeter"